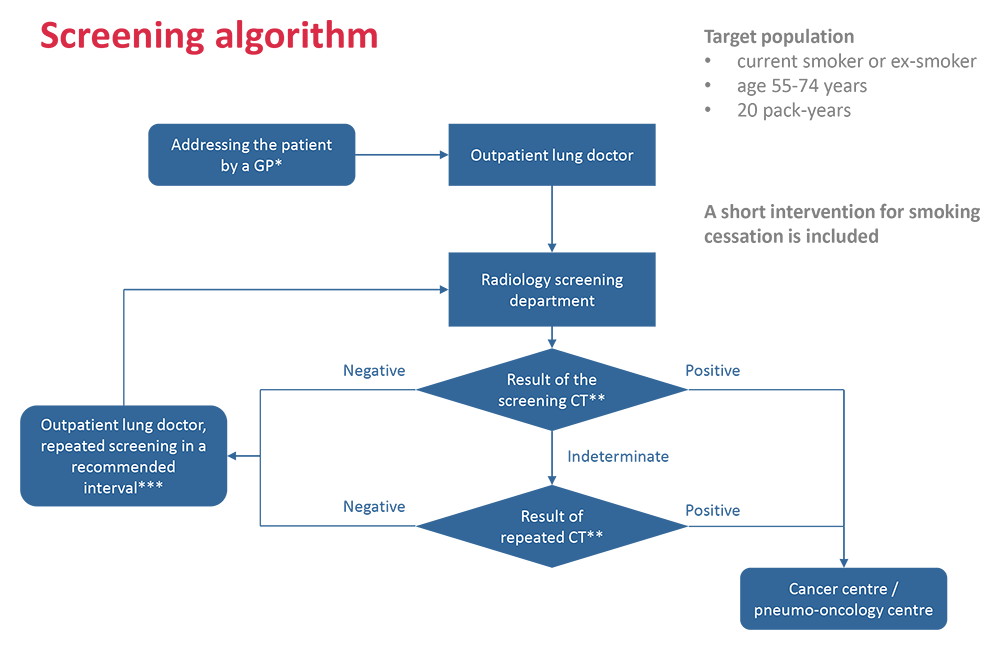 * In specific cases, direct referral of persons meeting the inclusion criteria by a general practitioner to the radiology centre is possible

** Patients with a LDCT (low-dose CT) result contact their pulmonologist, who arranges either further investigation or referral to a cancer centre or a pneumo-oncology centre

The main source of data on cancer epidemiology is the National Cancer Registry of the Czech Republic (CNCR). Today, NOR is an integral part of comprehensive cancer care and with 100% coverage of the Czech population, it contains more than 2.8 million records for the period 1977–2020. Registration of neoplasms is stipulated by law and mandatory. These data are available to the general public on the website www.svod.cz.

Incidence and mortality of lung cancer 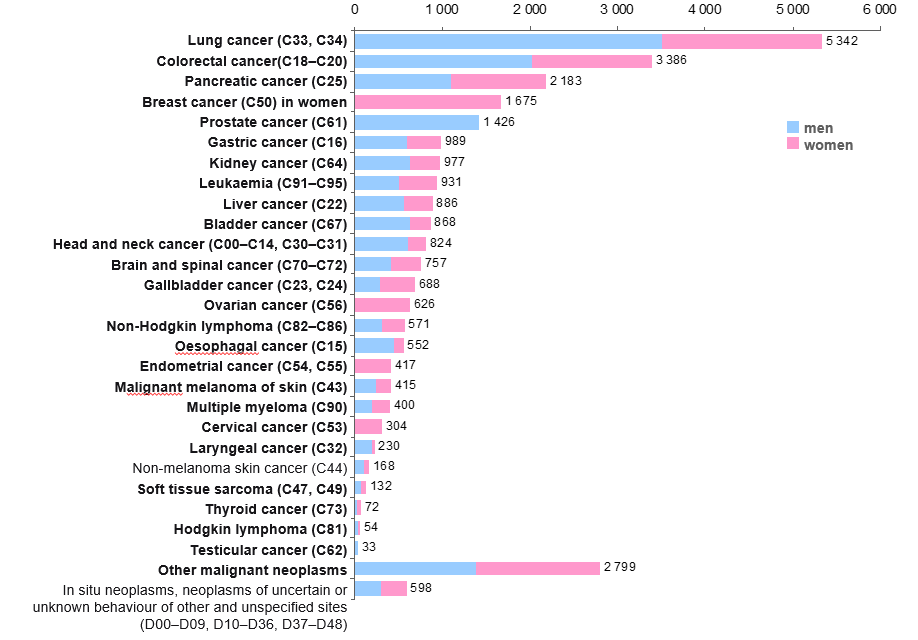 The mortality rate (i.e. the number of deaths from a given disease) of lung cancer is very similar to the incidence rate in the long term (Figure 2). Around 6 700 patients are newly diagnosed with this cancer in the Czech Republic each year and approximately 5 300 patients die from it. Males have a higher incidence and mortality rate of lung cancer than females (Figure 3), but while a decrease in both incidence (-12.0% between 2011 and 2020) and mortality (-15.0%) can be observed in males, both incidence (+17.7%) and mortality (+17.4%) have been increasing in females. 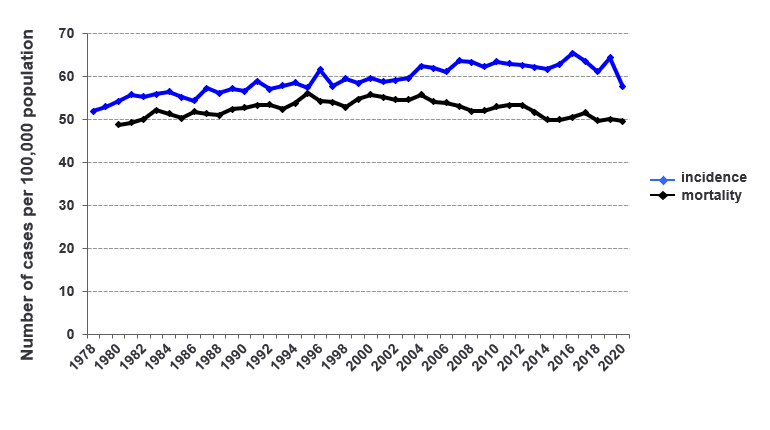 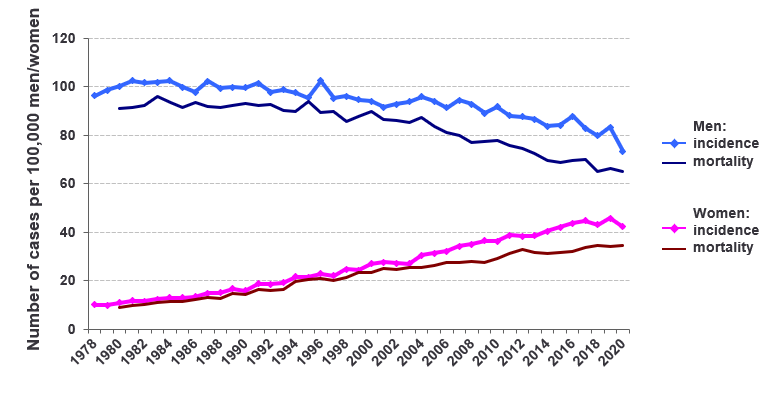 In the last ten years, there have been signs of improvement in the epidemiological situation, especially a stabilisation or even a decrease in mortality, but with the ever-increasing incidence. The inevitable consequence is an increase in prevalence, i.e. the number of living people who have been diagnosed and treated for lung cancer in the past. In 2020, the prevalence rate was 13 632, an increase of more than 34% compared to 2011 (10 182) (Figure 4); for men it was 17% and for women 67%. 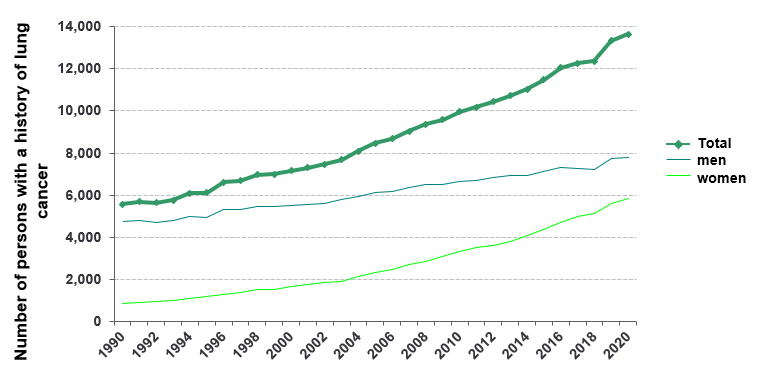 It is well known that detecting cancer at a less advanced clinical stage significantly increases the chances of a good treatment outcome and long-term survival. Unfortunately, available population-based data on lung cancer show that a very high proportion (more than 70%) of new lung cancer patients in the Czech Republic are still diagnosed at clinical stage III or IV (Figure 5). This is a very negative fact, also with respect to the 5-year relative survival of patients treated for lung cancer, which is approximately 13% for stage III and even only about 3% for stage IV. In contrast, the 5-year survival for stage I is almost 66%, and thus improving early detection may have a significant positive impact on lung cancer mortality in the Czech population. 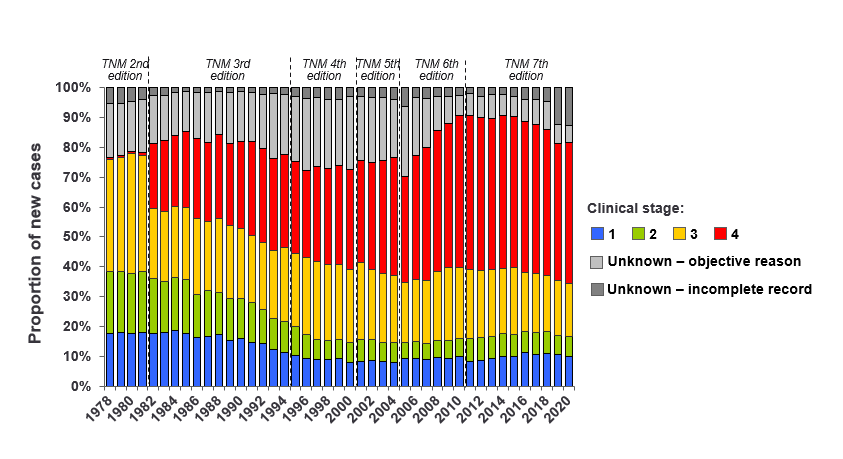 The typical age of a Czech lung cancer patient is 64–75 years and the average age at diagnosis is 70 years (Figure 6). Thus, a quarter of patients are diagnosed at a productive age. Figure 7 shows the age-specific incidence profile of lung cancer. 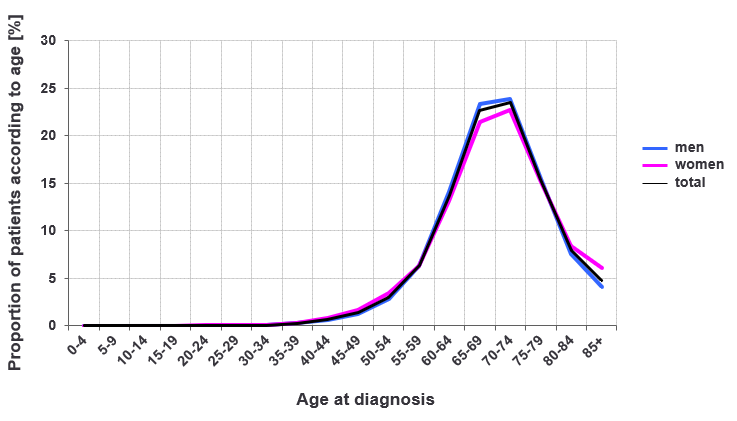 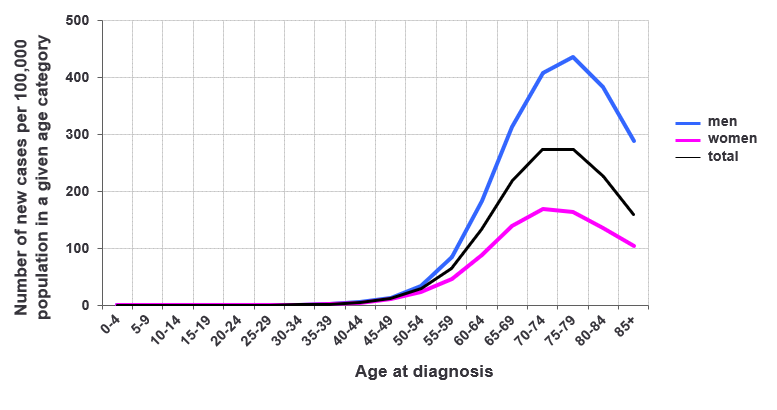